World Superbikes is on the precipice of history with Jonathan Rea mathematically capable of winning his fourth world championship in a row this race. How did he do?

Tom Sykes converted his incredible pole position into a race lead ahead of Jonathan Rea, Lorenzo Savadori, Xavi Fores and Alex Lowes with potential title spoiler Chaz Davies in sixth place as the first lap settled into its rhythm. Rea couldn't find a way past his quick teammate on the first lap, but on the second lap Rea took the lead as Fores took third place. Rea's tight entry into turn three let him pass Sykes cleanly and take the lead.

Alex Lowes crashed out of fifth place and rejoined well out of points contention, turning his race into a data gathering exercise. A lap later, Michael Ruben Rinaldi dumped his bike into an air fence after the Panigale's engine decided that the oil inside it would be better off turned into smoke. This being the last European round of the year, his season ended with medics brushing kitty litter off his leathers.

By lap four, Rea had eked out a lead from Sykes as Davies reclaimed fifth place from Toprak Razgatlioglu in a hard crowbar prise at the very tight Chateau D'Eau corner near the end of the lap.

A lap later, Jonathan Rea set a new lap record as he escaped the challenges of Tom Sykes while Sykes tussled with Xavi Fores. It isn't until lap eight, when Rea was a second clear of Sykes, that Sykes finally cut the cord to Fores, letting Lorenzo Savadori distract the Ducati rider in a battle for third place. As Rea set the lap record again, Davies was two seconds off the fight for third, in fifth place.

As Rea, Sykes and Davies were recording 1'37 laps, Loris Baz and Toprak Razgatlioglu were fighting over eighth place like it was a podium spot. Marco Melandri was also down in the 1'37s, catching van der Mark who joined him at the faster pace as the pair left Baz and Razgatlioglu in their wake.

At two thirds race distance, Jonathan Rea had a two second lead over Tom Sykes who was three and a half seconds clear of Xavi Fores and Lorenzo Savadori, but behind them, Chaz Davies was on a charge, closing was was a gap of over two seconds and joining the fight for the last podium spot just five laps from the end.

Marco Melandri caught and passed Michael van der Mark three seconds behind Chaz Davies but that was it at the front of the race. That was the last change of place in the top seven while Razgatlioglu and Baz were joined by Eugene Laverty just to make the last few laps even more fun if you were fighting for eighth place.

On the last lap, Jonathan Rea gave his onboard camera the thumbs up and knew he'd done enough. Crossing the line with a standup wheelie, nodding to his team, he claimed his fourth successive victory, doing in four years what Carl Fogarty took six years to achieve. On his victory lap, he parked up in a large run-off area, handed his bike off to some awaiting team members and sat down for a quick game of draw poker against 2015, 2016 and 2017 Jonathan Rea doppelgängers (one of whom turned out to be Fabien Foret) winning, all in, with a four of a kind. After climbing the security fence and waving to the crowds, he returned to a different-looking Kawasaki, his team having taken the the time to replace the carbon bodywork with a more Sofuoglu-like gold-themed design. While scrutineers will shake their head at the bike being modified before its return to parc fermé, it was an impressive bit of work.

Tom Sykes's second place helped Rea's title win, but not as much as Davies's fifth place. Xavi Fores and Lorenzo Savadori made Rea's victory a mathematical certainty, with Fores getting yet another podium.

4 dominant years in a row for Rea. He's won 52 of 99 races on the Kawasaki - if you completely ignore his career at Honda that would still put him tied for 2nd in career wins with Bayless, in only 4 seasons! Hopefully someone can step up and challenge him next year. If not, Dorna really needs to find him a worthy ride in MotoGP once his KRT contract is up, or risk a lot people not watching WSBK anymore. Unfortunately I was not watching MotoGP when Doohan won 5 in a row, so I'm not sure how that affected watching it.

Even though Marquez is on his way to 5 championships in 6 seasons, MotoGP has still been great to watch all of those years.

By comparison, Rea @ KRT vs Marquez in MotoGP: 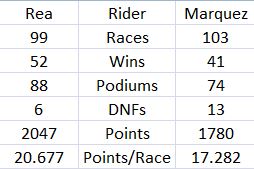