World Superbike race one was a dry race, with the sun making a much needed appearance on the grid.

Davide Giugliano didn't get a good start and let most of the first few rows past. Sylvain Guintoli took the early lead with Marco Melandri following him, but both of them were quickly dispatched by both Alex Lowes and Loris Baz.

On the second lap, Loris Baz pushed past Alex Lowes, but was retaken by Lowes with Sylvain Guintoli following. Tom Sykes in tenth place set the fastest lap after a bad first lap. The fastest lap was then set by Guintoli while passing Lowes to take the lead, while Davide Giugliano and Marco Melandri leaned against each other on the last corner, in fourth and fifth places.

Also setting a fastest lap, Baz took the lead from Guintoli who tried to take it back at several points throughout the lap, until Alex Lowes pushed him to third place. Loris Baz, with Alex Lowes in tow, then set about trying to break free from Guintoli, while Macro Melandri and Davide Giugliano closed the gap.

Tom Sykes forced past Chaz Davies, Leon Haslam and then Jonathan Rea in under a lap, and was staring at a three second gap to the battle between Davide Giugliano and Marco Melandri, a battle that Giugliano was winning. On the tenth lap, Giugliano had passed both Aprilias and made a pass on Lowes that, in spite of a near crash at the Foggy Esses, he managed to hold.

Davide Giugliano made a few valiant passing attempts on Loris Baz, side by side on the straight, but Baz thwarted every one. Baz's teammate Tom Sykes set the fastest lap again, in pursuit of Sylvain Guintoli and passed him going into the Esses chicane, with Guintoli having to take to the run-off area, dropping to ninth place in the process, behind Rea, Davies and Haslam but ahead of Toni Elias.

With Baz, Guintoli and Lowes in a pack at the front, Sykes's only target was Melandri, and he passed him at the end of lap thirteen. Over the next three laps, he closed the two second gap to Lowes in third.

Entering the Esses, Davide Giugliano tucked the front inexplicably and surfed his bike into the exit of the corner in an unusual crash that left him looking bewildered. He was able to remount, but that was his race finished.

Tom Sykes was then in a podium place, and in the championship lead if the race were called there and then, getting enough points to close Jonathan Rea's four-point lead. Sykes then set another fastest lap, one that would stick, and reeled Lowes in, passing him with five laps left and one second to Baz in first.

With three laps remaining, Sykes passed Baz, but Baz passed him back. The two then locked in a duel that would last until Tom Sykes took to the inside kerb to force past Loris Baz and have the lead into the second half of the track, the section where Sykes was visibly faster than anyone else all day. With enough of a gap, Sykes was able to hold his lead to the line and win the race ahead of his teammate Loris Baz, with Alex Lowes taking third place. 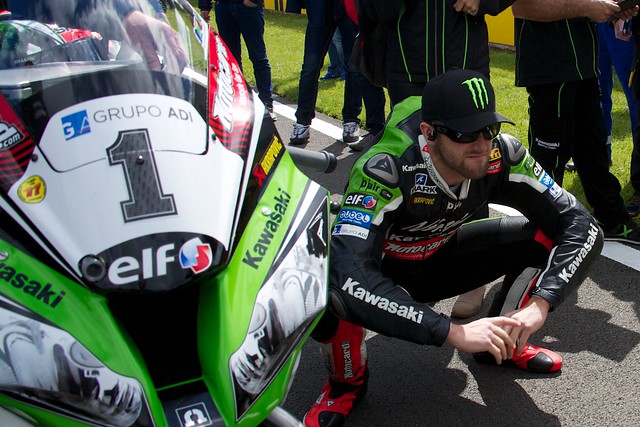 I've been waiting for his break-through ride for a while, this was close to it. Can't take anything away from Sykes who really did a Marquez in this race, but Baz is truly ready to step up.

The first podium finish for Alex Lowes, cheers to him! Let's see if this is because of home turf or that it is something he can build on in other races as well.

Second podium for Lowes. He got second place in race two, Assen.