Talk about all things motorcycling and non-motorcycling, not directly related to racing. No Politics.
Forum rules
Post Reply
7 posts • Page 1 of 1

I've been a reader of MM for a long long time and I'm super impressed with the knowledge of the people who visit and post on this site. You guys are awesome and I've learned a ton just from reading the comments to all the articles. With that being said, I was reading a paper on the aerodynamic effects that dimples have on a golf ball and it got me to wondering if this tech has been extended to other areas. Does anyone know of a bike where this has been experimented with? I did a google search and didn't really find anything. It seems so obvious that it would have been tested at some point because the difference of ball flight between a dimpled golf ball and a nondimpled ball is quite large. With MotoGP and F1 they are looking for every 1/10 that they can I would think that they've already tried it if it isn't already outlawed via the rules...
Top

Ok, not really my field of expertise and there are people on here who will understand it much better than me but anyway:

1. Dimples on a golf ball are not about reducing drag as such, but about 'flow separation'. That is, how the air leaves the ball as it passes over it. I think.
2. On an F1 car, a similar effect is achieved using vortex generators on the ends of the wings and bodywork. Usually these are serated edges or winglets.
3. A golf ball spins as it moves in the air and separation occurs at different points, so the dimples need to be placed all over the surface. A car or bike moves through the air in a more consistent way, so separation generally occurs at the same point (say the edge of the wings or bodywork). Therefore, you only need to add the vortex generators at those points.

So effectively, this technique is being used in F1, but in a different way. I'm not sure about MotoGP, I've never noticed any vortex generators or anything like that on the edges of bodywork. 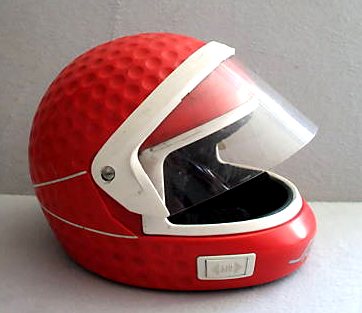 I can't imagine why not!

My first love was my motorbike, we went through everything together. Wind, rain, fences..
Top

I kind of figured that it was due to the rotation of the golf ball and maybe it wouldn't apply to a vehicle that doesn't really move through the air the same way. That bit about the vortex generators on F1 cars is very interesting.

Thank you again for the very informative reply!
Top

This post on an F1 engineering forum gives a more detailed (and accurate) answer: http://www.f1technical.net/forum/viewto ... =golf+ball
Scroll down and you'll see what I mean about the vortex generators.

http://dsc.discovery.com/videos/mythbus ... imyth.html
If Jesus had ridden, he would have rode a two stroke
Top
Post Reply
7 posts • Page 1 of 1