Discussion and debate about the MotoGP class
Post Reply
34 posts

How the hell did Ducati top one of the slower sectors in qualifying, by the way?

Yep. Many questions have been raised by those Qatar Races. Seems Everybody focused on Ducati top speed and Yamaha Corner Speed (like always) but IMHO the most intriguing points the facts all Ducati (except Miller who encourtered various issues) did very fast races compared to the recent past . this implies they found more than top speed maybe. I'm eager to see how it will go in the two next races especially Jerez.

Same for Yamaha. Where did they suddenly find this ability to fight ? And what about the grip/traction under acceleration ? is it due to especially grippy track conditions in 2021 or did they find something in electronics they were missing during the last seasons ?

It makes me think both factories made a step during winter. Not sure it's due to riders only but it's hard to understand with tests & races on one track only.
Top

Yes for sure it's really difficult to make any larger statements at the moment when they have only been to the track in the desert.

For me in race two it looked like the Yamaha especially was getting amazing drive out of the corners. Quartararo especially was really jumping out of them, for a few of his passes he was almost by the side of the bike in front before he even had to break. Then on the main straight he was pulling out yards even on the Ducati - eventually the Ducati got going into top gear and pulled ahead but because of that initial acceleration it wasn't as pronounced as it normally would be.

The last time I can remember seeing the Yamaha get that much drive out of corners was the 2015 machine, and we know what result they got that season !
Top

WayneG wrote: ↑
Sun Apr 04, 2021 4:54 pm
What a Moto3 race. We may have a new Marquez in the mix. Congratulations Pedro Acosta, one of the best rides I have seen in 45 years of following this sport.

Acosta is a revelation. Particularly in this race, after his great performance last week, I was watching him carefully. Not only is he fast - he won after starting from the pitlane - but his racecraft seems spot on. And he has the maturity (at 16!) to race at the front while staying out of trouble. He is my current favourite for the championship.

Moving to MotoGP, the Ducs seems to have some serious straight-line speed again. Concerning comments on the off-season, perhaps some simulation work has been going on. What is allowed?

KTM and Honda are disappointing. Why are both of them so far back? I think P.Esp was moving forward before an off-track excursion. But, even without Marquez this is

My predictions are that with them being able to develop the engine more than other teams, KTM would move even further forward. They appear to have gone backwards instead.

Too early to say of course, but I think that Fabio Q has a good chance of the championship this year. Usually when I make such predictions it'll be zero points for whomever I tipped for the championship next race.
Top

From what I understood Honda and KTM had the same Issue with the front tyres. The only usable Front tyre for the race was the soft and it's not stiff enough for them. the Medium was asymetric and pretty bad . KTMs used it for the race nevertheless (Binder explained he was scared to be forced to use it after a few crashes) ith kinda good rewards. Brad finished 8th I think. Not bad after a pretty horrible trip in Qatar for KTM.
Top

The engines are suppose to be the same as last year. I'm not sure exactly how they can enforce that as even if the measurement identical, what is to stop them using slightly different materials that would permit slightly higher revs and/or change the weight of components. Anyway I'll assume there hasn't been any cheating.

It appears to me that the Ducati and more obviously the Yamaha have improved in areas where development was permitted perhaps a little more than Suzuki and this has meant that Suzuki's advantages have been reduced while their while disadvantage has remained the same.
My signature isn't particularly interesting
Top

I think the scrutineering carry out some really in-depth analysis of the engines. That was how they noticed that Yamaha were using different valves last year and penalised them. Yamaha themselves thought they were getting the same component but they had to change manufacturer, even though it was meant to be created to spec the alloy mix wasn't exactly the same as the previous version (one that had been given to scrutineering at the start of the season as the template bike) and they got called on it.
Top

The engine homologation is an honor system. There are not any checks. It is upheld only by threat of strick enforcement that any non conforming engines would be penalized each time where it was used at an event retroactively.

The rub with last years yamaha thing was that that did not occur. It became obvious by the way Yamaha tried to undo the change, effectively telling on themselves, asking for special consideration on safety ground but then opting not to turn over additional details needed to make that case.

Lots of fuss was spared by Suzuki taking the riders championship as none of the other mfgrs, who one may wonder if they live in glass houses themselves, threw a stone. The end result was Ducati wining the manufacturers championship as a result where yamaha would have slightly out scored them and won it otherwise.

Below are some snips from rules where I circled some paragraphs. 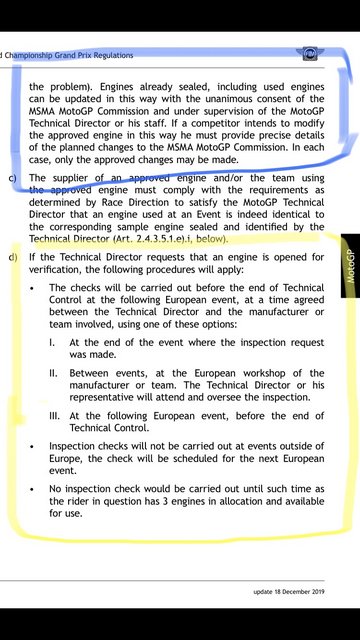 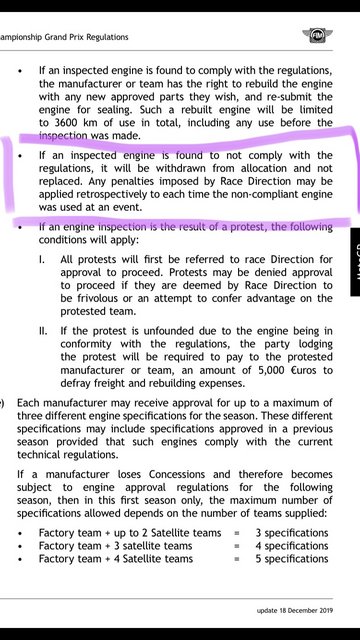 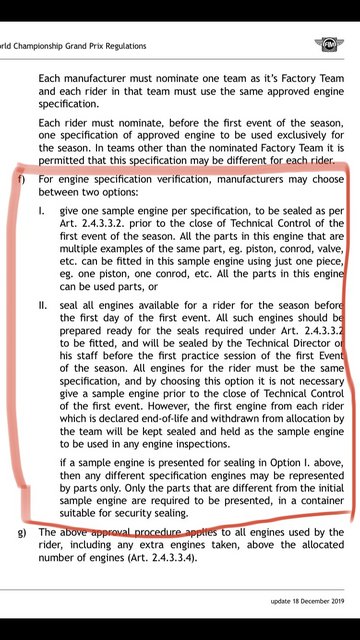 The Yamaha riders were lucky not to loose their points.

If Yamaha had got the valves right in the first place, would the improved reliability potentially resulted in a rider winning the world championship? I see two factors to consider in this what-if;
1. DNF's caused by failures
2. Detuning of engines to reduce failures
Perhaps a longer shot in this what-if is considering there being less engines than planned for the tail end of the season
My signature isn't particularly interesting
Top

Crikey Kenup good job finding that in the rulebook and posting it.

Yes I think definitely helped not escalate things by Mir winning the riders championship, probably would have gone on for some time afterwards if it had been Morbidelli.
Top
Post Reply
34 posts