Discussion and debate about the MotoGP class
Post Reply
340 posts

Ouch. I'm sure this has to do with him knocking Oliveira off and injuring him.
-----
Everything we consider fiction is reality somewhere else. This is somewhere's fiction.

CLX wrote:Ouch. I'm sure this has to do with him knocking Oliveira off and injuring him.

I think it safeguards their development too... if he's off testing for another team next year, why allow him to take KTM's development with him? May as well get a rider who's not going anywhere to put the miles on the machine in the remaining races with the intention to improve the package for the future.
Top

Tin foil hat on - Mika has been wanting Wildcards and shows his hunger to ride. Behind the scenes, his manager might have been pushing for this and have KTM see the light once Zarco's departure was imminent.

TBH - I am happy for him- hes got $$ experience and freedom. He has the talent. Now he can step away from the circus and regroup himself and if he wants to come back then he will at least happily work towards that.
Top

I'm betting you guys are right about the reason for Zarco leaving now. There is the possibility that it was Zarco who made the decision
My signature isn't particularly interesting
Top

Finally. Good news for Mika. I was thining KTM would have worked him into the fold sooner, hopefull this works out well for the both.

I also wanted to put here somthing I noted during at Missano qualifying. That Pol on the KTM was strong (top3), both in sector 4 topped by yamaha and sector 2 topped by Marquez.

Flrst thought was could KTM have a shot at finding the best between both. Lookng close saw these two sectors where KTM featured were comprised of turns just in one direction and some heavy braking and accelration from slower corners.

Where they fell out of top three quickest sectors was 1 and 3, which respectively have tight quick changes in direction, and long fast sweeping series of turns.

Just gave me thought that making quicker direction changes may be a focus area for them next. Torsional twist, geometry, Cg, lots of things come to mind that could be related. Don't want to go too far down that rabit hole of guessing here, just found it intresting to share where they showed strengths and weaknesses given the way the sectors were broken up made it clearer than most tracks allow.
Top

Pols qualifying result only shows he is good for a fast lap when following a top rider who is also on a flying lap
The same goes for his brother
He soon fell back down the order after the start of the race
They need to find a rider who can ride it hard for next year
Maybe give some moto2 riders a test on it to see how they go. Look at quatararo how well he is doing and no one thought he was good enough when he signed
Top

I don't think KTM's lack of competitiveness is down to the riders.
Top

Mikesbytes wrote:There is the possibility that it was Zarco who made the decision

According to sources, Zarco was not the one who made this decision.
Top

Re: KTM better, much better

Pol Espargaro qualified second & finished 7th in the dry. Zarco qualified 2nd at Brno in the wet. Every racer is trying hard in qualifying. KTM is up there in Q2

After watching Misano Marco Simoncelli MotoGp again I'm impressed with the KTM right now! They are much closer than two & a half seasons ago.

Pol got a goodish start, not just a good start for a KTM. Out of the blocks Pol was ahead of Marc Marquez, not for very long. Alex Rins (2 wins) & Valentino couldn't get past for six laps. Rins had to push so hard to get by at the beginning of lap 6 that he made a mistake & P.E. 44 took the position back again.
Rossi was unable to get ahead of Pol until three quarters of the way through lap 8.
Dovi was behind Pol's KTM for a long time. Pol could stay ahead of the Ducati in acceleration & on the brakes. A.D.04 finally got by on the change of direction early in lap 10. Yes, I know Dovizioso had a pooch of a weekend.
A.R.42 did not pass Pol again until half way through the race, 15 laps in iirc. Copped a penalty, then lowside out of the race

To this observer, on Sunday at Misano the KTM looked quite good, nothing wrong with the RC16 motor to the casual TV watcher. Good enough on the brakes to stay in front of Dovi, who is considered good on the anchors.

I reckon KTM are doing rather well, shame it didn't work out for Johann Zarco.

Wondering if Johann Zarco has ever raced a steel tube framed motorcycle. Does anyone know. Maybe the feel is too different for J.Z.5 to get comfortable with the KTM?

From what David writes on the main site it seems Johann Zarco was pushed..."you also have to think of rider safety and danger because the riders are risking a lot. For sure KTM is not a company that will force a rider to do things on a bike that maybe he doesn't like." O H & S for the rider of corse, safety first. Really
"Faster, faster, until the thrill of speed overcomes the fear of death," Hunter S Thompson
Top

Thats bullshit, Oliveira deserve that seat. I wish Oliveira in another brand for 2021, ktm no more.
Top

Wolfman wrote:Thats bullshit, Oliveira deserve that seat. I wish Oliveira in another brand for 2021, ktm no more.

KTM promised Tech3 boss Hervé Poncharal that they wouldn't poach Miguel Oliveira from him. Taking Binder instead of Oliveira is a way around that dilemma, and putting the 19-year-old Lecuona in the Tech3 team gives Poncharal another young and exciting rookie.

Sounds reasonable to me.
Top

So there's a new approach for the frame, still steel but a bit of hybrid of design between there current frame a what the others are doing. David has posted a link on the main page to a photo https://twitter.com/Spalders/status/119 ... 69/photo/1 what I can't tell from the photo is whether the engine is still a stressed member
My signature isn't particularly interesting
Top

I am pretty sure Iker tried it on his last outing as well. This youngster is mighty impressive.
Top

Interesting that the new frame is using beam sections, and it isn't a pure tubular steel trellis frame.

I would not consider it or the previous to use the engine as a stressed member in the traditional sense we use the term,

however I did find it interesting one of my older bikes is also using box beam shapes made of steel. Works great 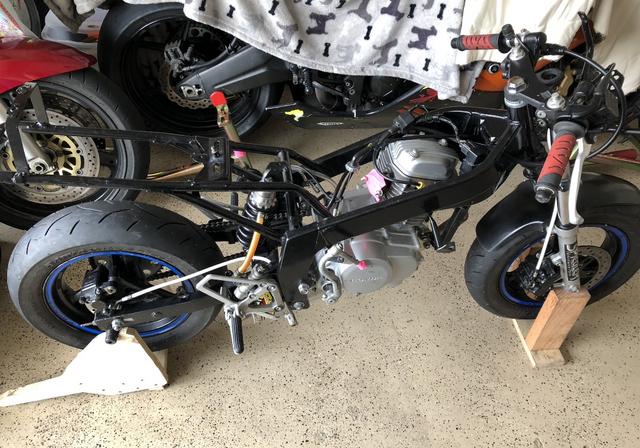 Vmax666 wrote: ↑
Mon Aug 24, 2020 9:32 am
KTM obviously have improved massively
2 wins with different riders one being a satalite team
Both who be in the works bike next year

I also noted the commentators (Hodgson I think) saying that the KTM can be ridden in different ways by different riders. So, it's not just a matter of the bike having only one way that it can be ridden and this may or may not be compatible with the style of a particular rider, and require other riders to adapt to the bike rather than the other way around. I.e. could it be said that the bike is not just fast, but also well-rounded?

PS: I don't expect this to happen, but how annoying would it be for Pol if Iker won a race, so that Pol was the only KTM rider who hasn't yet won a race on it?
Top

I am kind of expecting that to happen now! But that would be extremely cruel for Pol..
Top
Post Reply
340 posts