Not much activity here recently. I'll see qualifying later in the day. Interesting to see a Ducati 1-2-3 in FP3, with Quaratararo going through Q1. Could be an equalising weekend, though Fabio should have enough of a points margin to weather losing a few this weekend.
Top

Bagnaia on pole with Quartararo on 15th has breathed some life into the championship for Bagnaia, who needs to win while Quartararo comes nowhere. Still a longshot though
My signature isn't particularly interesting
Top

Bagnaia, Miller and Marini great qualifying. 4 in a row now for Bagnaia. When Marini spoke I had a flash back many years thought I was hearing Rossi!

Looking at timesheets both Bagnaia and Miller had another couple tenths in ideal time taking their best sectors together. Most others posted close to ideal.

Notable exceptions further down the field having extra in the bag were Nakagmi, Vinales, and Mir who all had sectors that were worth half a second quicker than times they posted. For Nakagami and Vinales those quick sectors came on laps that were canceled, for Mir they came on the lap he crashed.

I also managed to capture this snip below just for grins of both green and yellow being waved simultaneously. 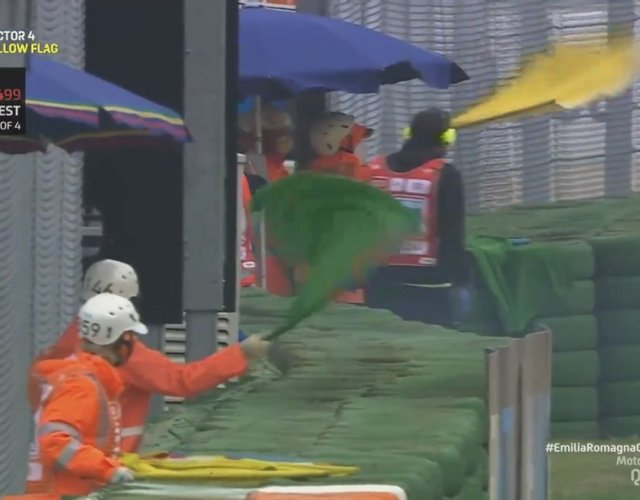 Well, that's the championship done for another year. Quartararo thoroughly deserves it. It looked like Bagnaia was doing everything he needed to do to keep himself in the game - until he wasn't. But, you can't fault him for trying. He needed every point and that included keeping Marquez behind. Which was a bridge too far it seems.

Two more races to go. It's going to be interesting to see the results as they will give us some indication of next year. For me, most important is how much Marquez has returned to form and whether he can mount a title challenge next year. I guess: yes.

I still won't see the Moto3 and Moto2 races until later. Looking forward to those.
Top

And 2022 looks like another classic in the making. Marquez’s new found form and Bagnaia seem perfectly capable of winning and challenging.

Cheers
-----
Everything we consider fiction is reality somewhere else. This is somewhere's fiction.

For Moto3, Denis Foggia is absolutely slaying it, while Pedro Acosta has an entire second half of the season that appears to be damage control. Acosta is 'the sensation', but Foggia has been doing a much, much, better job for many races now. Acosta is still young which is noteworthy, but I think that Acosta is to an extent cruising on a reputation built earlier on in the year.

For Moto2, again Remy Gardner built up a big points lead at the start of the season and barring Raoul Fernandez' big crash would have lost the lead of the championship today. Great win by Sam Lowes, definitely the rider of the day despite the other Fernandez's fightback. Gardner doubles his points margin through no real action of his own.
Top

Rick650 wrote: ↑
Mon Oct 25, 2021 5:35 am
Not common as usually at least the MotoGP champion has a championship in one of the other classes. KR2 would have been the last to not?

Nicky Hayden in 2006 had come straight from Superbikes (although he had sbk titles)
Casey Stoner in 2007. He never snared a 125 / 250cc title. That pesky Dani Pedrosa kept getting in the way

My first love was my motorbike, we went through everything together. Wind, rain, fences..
Top

Thanks for the reminders WG, two big misses! (though you might be thinking of Edwards in terms of WSBK title not Hayden, national titles don't count).
It looks like 2006 might be the last time with Bautista in 125s, Lorenzo's first title in 250's and Hayden in MGP.
2007 is out because it was Lorenzo's second 250 title.
Top

Ducati played the gamble of sending its riders out on different tyres that Quartararo used as they needed to get a win + Quartararo do badly, as per the grid positions. Temperatures cooled and the outcome was insufficient front end grip so the gamble didn't pay off.

Well done to Quartararo being the first French champion. I had a scan around to determine who was the 2nd best French rider of all time and its a bit difficult to quantify but it looks like its Zarco if you look over all classes. There are other French riders who have had successes .
My signature isn't particularly interesting
Top

I know there's another section for this but is it just me or was the Fernández crash in Moto 2 strange? Even in wet conditions for the front to lock so soon with the bike so upright doesn't happen so often.
Top

Schwantz34 wrote: ↑
Thu Oct 28, 2021 3:12 pm
I know there's another section for this but is it just me or was the Fernández crash in Moto 2 strange? Even in wet conditions for the front to lock so soon with the bike so upright doesn't happen so often.

It did look strange to me too. However, I haven't found anybody suggesting it was a mechanical problem or anything else than a crash. There's some alternative angles and commentary here: https://www.motorcyclesports.net/motogp ... tle-hopes/ The commentators seem to be saying that he was just out on the wrong part of the track and locked up in a straight line.
Top
Post Reply
12 posts • Page 1 of 1